After the event that evening we put our feet up in the pub and a conversation with Reactor’s Niki Russell and Daniel Williamson arose about the pros and cons of the 24-hour idea. Since that evening, I’ve been thinking more about this. On a practical level it gave us time to hothouse ideas and an uninterrupted mini-epoch for making. It was simply an opportunity to get immersed in something and push other ‘noise’ to the side. Some would argue that sleep deprivation leads to an altered state of consciousness that in turn fuels creativity. Then there is the use of sleep deprivation in various religions and asceticism. The oldest recorded religious tradition of sleep deprivation was practiced by Taoists who believed that a sleepless night would bring them nearer the truth. The Taoists also thought that sleep and resulting dreams would make them vulnerable to attacks from demons and evil spirits. Various forms of the all-night vigil are found in numerous religions including Hinduism and Buddhism. And there is also the idea of enlightenment as ‘awakeness’. But stepping back from the spiritual implications of sleep deprivation, many scientist, such as Robert Stickgold, a cognitive neuroscientist specialising in sleep research, argues that: “Sleep deprivation doesn’t have any good side effects.” Lack of sleep simply increases stress causing the deprived to become more irritable, raising blood pressure and lowering the immune system. Other recent research undertaken by neurophysiologist Marcello Massimini, suggests sleep deprivation amps up the brain, the brain becomes more sensitive as the day wears on: the deprived is reduced to a jumpy nervous wreck.

Some other facts on sleep deprivation. If you keep a rat awake for 17 – 20 days it will die! The US military has experimented with the drug modafinil to keep soldiers awake whilst in action. Keith Richards from the Rolling Stones reportedly stayed awake for nine consecutive days and then fell over and broke his nose.

One thing is for sure, sleep deprivation during the Ugly Weekender created a step towards a post-optimal state: foggy brain, concentration shot, slow-motion antics. Things broke, didn’t work, or made no sense. All the sound devices made during the weekend had short-circuits and began life silent. Computers crashed and hi-tech became lo-tech became no-tech. Elements of the final performance were reduced to rubbing and knocking stones together and rolling on the floor with noisy pom poms.

During the weekend I wanted to further explore ideas of making and thinking in the ‘post-optimal’. We soldered in candlelight.

The audience arrive clutching their Ugly Construction Booklet. Jennifer Allan mixes seemingly effortlessly between different material creating dark ambient textures that set the tone for the evening and gives rise to a state of expectation. The previous night’s workshop,come-dining room, come-dormitory is transformed into a performance space.

Two light bubs, suspended from the vault-like ceiling of Primary and operated by two performers, swing casting shadows across the space. The lights flicker randomly and appear to be amplified. An intense contrapuntal clicking plays out. Performers occupy the floor kneeling and awaiting direction from John R.  On cue, large circular movements with stones in hands beat-out repetitively on the wooden floor with broken light-casts in ritualistic action. Moon-age then walks into the performance space wearing paper costume and adornments made by herself and Loz Atkinson. The stone-drone builds and is momentarily broken with committed stone-banging interjections (it’s all a bit Kabuki theatre-like), whilst Moon-age’s ‘bird’ flitters across the space. A paper beak is removed and Moon-age enacts a stone-licking ritual: a large stone is pushed across the floor using the tongue. The post-optimal technology theme found in the booklet points towards the stone-age!

The music takes a turn towards the electronic in typical Dirty Electronics fashion with fragmented rhythmic material, hiss, noise, and deep tones.

A large projection screen is pulled across the floor subsuming Moon-age and showing a projected grid. Suddenly movement beneath the screen produces a dynamic three-dimensional contour map like something from the Ordinance Survey and the grid expands and contracts with the music. With four performers holding the screen, Moon-age really goes for it. There is something unnerving about the terrain moving at times violently and at others gracefully. Then the movement comes to rest and energy ripples away ghost-like through the silent screen.

A work explored by Leila Houston and John Fass follows with Moon-age and short video by Julian Hughes. The flickering theme continues with downward projected light illuminating hung paper cones, Moon-age’s face up close and the same visual composition projected large in the background. The cones poetically suggest carrying light and sound. With a building crescendo, the cones are severed from their light source to abrupt silence. 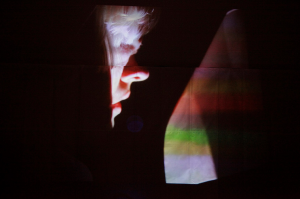 The opening ‘scene’ concludes with projected glowing numerical optics, as a smaller performance group spin hand-held motors to produce deep drones and a primitive interactive visual (a meter) increases and decreases with current produced by the make-shift alternators.

Special guests Jake Tugby and Ayden Walters perform during the interval with real ale served from a hatch. The evening gets more boisterous and the second half of the event begins with a decidedly absurdist twist. Lucy Stevens, Jim Frize and Phil Henderson present the Concise Bird Guide. It’s a mixture of real and electronic-sounding bird song with wry commentary/poetry from Phil Henderson talking twitcher’s stuff. The ironic Power Point lecture presentation goes tits up, making the whole experience even more ridiculous. Somehow this seems to suit Henderson who turns the whole situation into a piece of absurdist theatre. The night concludes with Sam Topley’s pom poms and a large group assembled on the floor hugging, crushing, rustling, and caressing acoustic pom poms.

Lucy Stevens steps outside hoping to capture the dawn chorus, but it is still early in the year and she returns with just a few chirps. The chilly February night gradually cross-fades into grey daylight and breakfast, made by Smallfood Bakery, arrives. Everyone is still sleepy, but there is some discussion on where to start-off things again.

Amit (Dushume) Patel has been building the Ugly Construction circuit designed by JR and is now working on another iteration with Sam Topley. There are short-circuits everywhere as hand, eye, and brain co-ordination stutters due to sleep deprivation. Phil and Jen do some soldering with JR to turn an old MG car steering wheel into a filter. There is some discussion on the aesthetic quality of the steering wheel and its shortcomings. 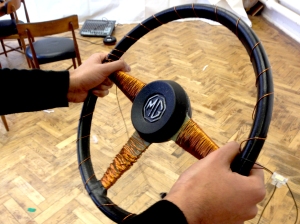 Jim and Lucy are getting even further into the ‘wrong bird’. Circuits are being drawn up and ideas for a performance with Phil based on text from a Concise Bird Guide are coming together. JR starts working with a group rehearsing/devising pieces, one of which involves motioning stones over Primary’s parquet floor. This results in a surprising range of sounds due to ruts and hollows beneath the floor. Jen has also been working with mic in hand and computer at arm’s length over the last 24-hours. Bird song, drones and warped voices point to a set.

Smallfood’s contribution over the weekend has been incredible. The meals gave a structure to the event around which the devising and making took place, and the meals also served as some form of quasi-religious ceremony. The lunch/‘Tea Party’ was in many ways the most radical with a selection of decorated savoury cakes, sweet winter salad, and tea gelato: mentally and physically demanding.  … 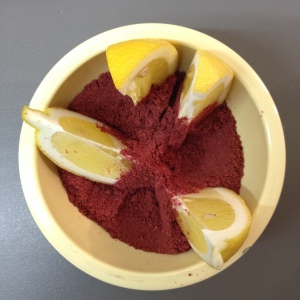 We tried hard all night to experiment with different versions of projected flicker. Phil Henderson put us onto Tony Conrad, structuralist film maestro and flickernaut. Projecting one of his videos onto the suspended cone had some interesting effects. Moonage agreed to be our performer.

We’ve been trying to see what happens when we use materials with varying transparency and opacity. The difference in meaning seems to be between clustering and layering. We’ve also strung them up in lines in the hope that light will pass through the apex of each come to cast light on the one above. It works OK but drop off is quite severe. 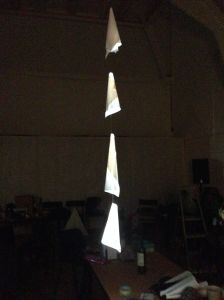 People are beginning to get sleepy and a few heads have hit the hay for power naps. Phil the wordsmith fell asleep with the light of his poetry faling on his face.

John and Jim have been trying to get the weekender circuit up and running but eventually settled on an incredibly life threatening analogue solution. 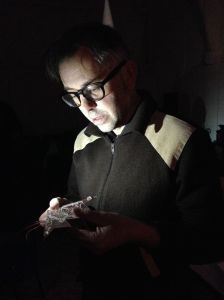 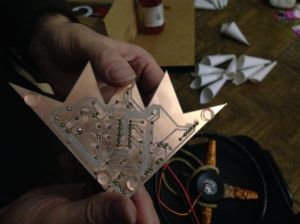 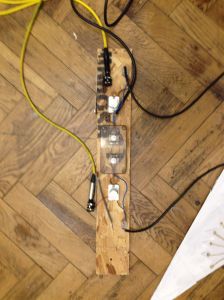 Sam and Moonage’s pompoms have also been in heavy production. Sam crafted a hike made speaker and has been producing abstract squeaks 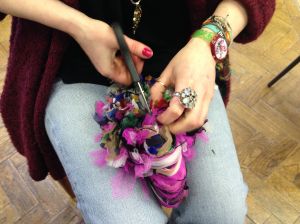 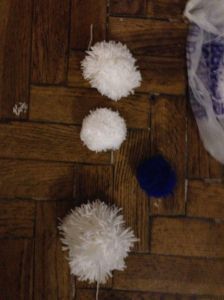 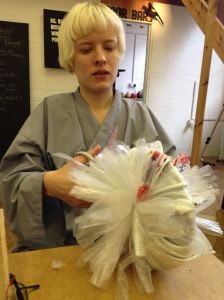 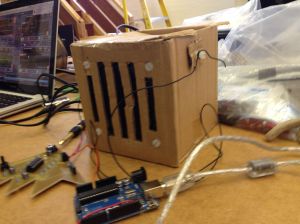 Things have moved on a bit since my last post an hour ago. Moonage and Loz Atkinson are making a circuit costume. This is based on the custom circuit John Richards designed for the event. So far the costume has the feel of an art deco head dress, bringing to mind Brigitte Helm crossed with Oskar Schlemmer.

Jim Frize and Lucy Stevens are making a schmidt-trigger based feedback network that mimics bird calls. The arrangement of resistors and capacitors itself generates the sound in a subtle manipulation of electrical signal processing. Their intention is to project the circuit diagram and play the sound of the real bird, then reverse the setup  – it’s beginning to get densely intertextual.

Leila and I have turned to paper cones instead of the plastic. Our idea is a projected image cascade with diminishing strength as the projection drops off with distance. The task for now is to suspend enough cones to get the effect and to find the right content for projection. 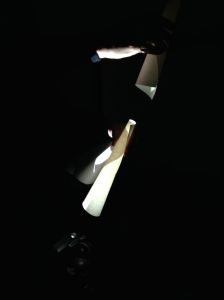 Meanwhile the wrapping of the steering wheel continues…

Early ideas here in Nottingham include recording or reproducing the dawn chorus, playing the sound through various devices and filters. Birdsong is emerging as a theme. Phil Henderson and Eǝrth Rod make spoken word time machine poetry. We could generate automatic text for some kind of recital. 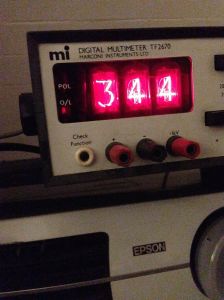 The subject of bell ringers and bell ropes came up…

Projection mapping is normally done by projecting dimensional images onto flat surfaces such as architectural facades. Instead, projecting a two dimensional shape onto a volume might be some sort of reverse projection mapping strategy. This could involve mesh transforms – a way of distorting images and sounds in a way that creates edge defined coherence. 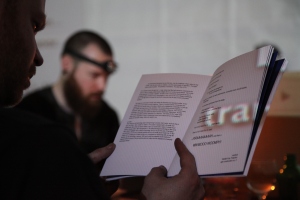 Sam Topley makes sonified pompoms, some amazing ones made of telephone wire and ‘leftover stuff from the kitchen’. Her plans are to squeeze of clash the pompoms into each other to make a composition.

Jennifer Allan is getting busy wrapping copper wire around an old MG steering wheel, not quite sure why. Leila Houston and I are trying to work out how to project a video into a white funnel. 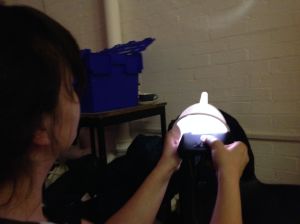 The night is still young and everyone’s getting busy on various tasks.

The dirty electronics weekender starts tomorrow Feb 13 2015 at Primary in Nottingham. The idea is we stay up for 24 hours experimenting, playing, eating, collaborating, and randomising. The weekend will culminate in a public performance at 19.00 on Saturday. We will be documenting proceedings here as the event unfolds. Stay tuned…